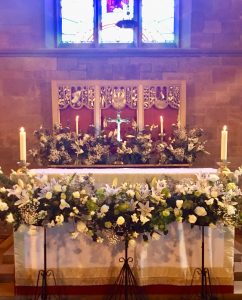 “In the Name of the Father, and of the Son, and of the Holy Ghost. Amen. I will go unto the altar of God:
Even unto the God of my joy and gladness.”

The above lines are the first prayer spoken at the Sunday Eucharist by the Priest. It is a preparation between the celebrant, servers and choir. The “altar of God” is given a place of primacy. This prayer was included for the congregation in the 1970 Scottish Liturgy (but not in 1929 and 1982 versions).

The altar is the most sacred place in our church. It is where God meets us in our celebration of the Eucharist.

There are three aspects to the altar to briefly discuss:

1. The practical aspects of the place of the altar as it relates to worship
2. The Hebrew background of altars
3. The Christian significance of the Lord’s table.

In this period, the altar sometimes was placed facing east/west with the celebrant on the north side. The reforms of Archbishop Laud in the reign of Charles I established the position of the altar in the sanctuary with the celebrant facing east with his back to the congregation. Laud also started the use of elaborate frontals on the altar that changed with the seasons. The two centuries following Laud observance of the sanctity of the altar reduced. However, it was revived by the reforms of the Oxford movement throughout the 19th century.

The place of the altar in the sanctuary was also challenged recently, partly through the influence of Vatican II. Altars were placed nearer to congregations in front of the chancel steps. This can be seen commonly today in large cathedrals. It is also the norm today for the celebrant to face congregations in the Liturgy of the Sacrament.

A long chapter would be needed to explain liturgically how the Lord’s table is looked after. Priest and Sacristan are responsible for this by managing communion vessels, the bread and wine, and altar linens and frontals. Such a chapter would include an obligatory refence to laundry and ironing of the linen!!

Altars are mentioned from the first book of the Hebrew bible. They were a place of sacrifice, and initially not in a fixed site. They could be made of earth, and, later, of stone. Extensive instruction is given for the construction of altars in the Torah.

With the settlement of the Hebrews in Israel, and the building of Solomon’s temple in Jerusalem, the altar became a place of greater and elaborate beauty.
The altar for sacrifice was outside the temple at the main entrance. It was constructed to hold the ashes of the fire and the drain the blood of the animals. Within the sanctuary of the Temple was the altar of incense providing an eternal light. Also nearby was the table of shewbread (the bread of presence). The Christian link is interesting. The table of shewbread had 12 loaves that were eaten by the high priests each Sabbath. In some Christian traditions, the bread of the Eucharist is taken only by priests. On one occasion this bread (the bread of the presence) is sacrilegiously taken by King David for his soldiers (1 Samuel 20.6).

A link between the Christian altar and Eucharist, and the Hebrew altar of burnt offerings is the washing of hands. The priest carries out saying the words of Psalm 26 – “I will wash my hands in innocence, O Lord, that I may go about your altar.”

The two main Gospel accounts of the Last Supper occur in Luke 22 and John 13. Although differing in their descriptions, they emphasize the centrality of remembrance for the disciples, and, by implication, for all Christians following them.

However, to get the real significance of the meal at the Lord’s table for the church, we need to read Paul’s first letter to the Corinthians. This letter draws a circle around the new Christians, marking them clearly apart from Jewish and pagan practice of altar sacrifices.

In verses 20-21 of chapter 10 we read “I imply that what pagans sacrifice, they sacrifice to demons and not to God. You cannot drink the cup of the Lord and the cup of demons…..”

In the next chapter (verses 17-34) Paul drives home the fundamental importance of correctly remembering Jesus at His table. At the table, everyone who shared the same baptism is welcome. There should be no divisions between rich and poor. The bread must be shared between all.
You must examine yourself before the meal otherwise “whoever eats the bread or drinks the cup in an unworthy manner will be answerable for the body and blood of the Lord.” ( 11:27)

Here we have the cardinal symbolic importance of the altar in Christian worship explained. It is the place that we all proceed to as equals to remember and share the bread and wine AFTER we have had reflected on our sins in confession.

Finally, therefore, at St Paul and St John the Evangelist, we come to our altar at the Eucharist. It is the altar of St Andrew’s Gartcosh. Its beautiful Arts and Craft style carving is exposed in Holy Week. At that time we use one further altar – the “altar of repose” for Maundy Thursday. This is in the St Andrew’s Chapel. 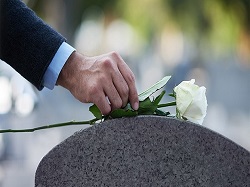