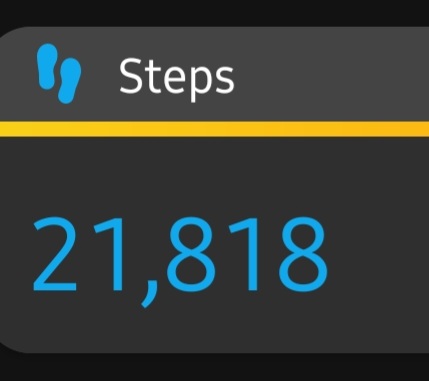 Each year on the last Friday in February LGBT Youth Scotland hold a fundraising day called Purple Friday. As part of it they hold a Pass the Torch Relay, with the aim that people all over the country will, together, cover the equivalent distance of walking round the coastline of Scotland. A total of 2,500km or 1553 miles, or 3,645,377 steps. As the distance between Holy Name and St Paul and St John the Evangelist is 7 miles I decided that would be my goal. I chose to do it around Lochend Loch which is about a mile round rather than walking the busy road between the two churches.

LGBT Youth Scotland do fantastic work in supporting our young people and in going into schools to provide education and information. Such support is important, teenage years can be tough going. Indeed even well meaning and supportive parents can be seen as far from being, when the stresses and strains of growing up make life tricky. Having someone else to turn to when there is no support, or no perceived support, can make a vast difference to the LGBTIQ+ youth in our communities. I had hoped to raised £250, as I write this the total stands at £390 which is simple marvellous. (My JustGiving page for Pruple Friday is open until 6th March Kirstin Freeman is fundraising for LGBT Youth Scotland) If you are reading this after 6th March then the JustGiving page will have closed, if you would like to donate then please go directly to LGBT Youth Scotland’s website and do it there Make a donation | LGBT Youth Scotland | LGBT Youth Scotland you can also find out more about their work.

Over on the Facebook page you can see short videos that were taken throughout the walk, in some various people talk about why they joined me, below is a brief summary of the day.

After Thursday being a white out with snow it was with trepidation I drew back the curtains on Purple Friday, but the day was still and bright. Indeed it turned out to be the most perfect weather for walking despite being a bit slippy in a couple of places during the first 1 mile.

Margaret and Irene from Holy Name joined me for the first mile, as we walked we chatted and said hello to others who were enjoying the morning sun, lots of the with their dogs. Our conversation at this point was mostly about the news from Ukraine, our fears, our hopes, so it was only natural that we stopped at the peace garden and said a prayer, among the chirping of hedgerow birds, for Ukraine and her people and the world as it tried to respond in ways that would bring peace.

As we approached the end of our first lap, we were joined by Pamela and Kayleigh and then at the car park by Nicola and Tracey. The 7 of us then walked the next three miles.

We weren’t in any great hurry so despite having started at 9.30am it was lunchtime by the time we reached 4 miles. We stopped and talked as we ate lunch. Please if you have time go and listen to the stories on Facebook – The Scottish Episcopal Church in Monklands | Facebook For me a big part of the day was about raising awareness these moving stories help do that.

While I had been delighted with the company for those first 4 miles, mile 5 was done mostly on my own, as I walked I prayed and gave thanks, for others involved in and with Purple Friday, for those who had joined me and their stories, for all those who work for inclusion and justice, and for the people of Ukraine.

While the morning had been sunny the clouds where now coming over and a sharp, but light, wind had started to blow, so it warmed my heart to see Geoff waiting at the car park and he and Paul joined me for the last 2 miles, minus a few hundred yards which I did myself. As I said in the wee video that began those last two miles, it would appear that females walk in the morning, men in the afternoon and priests all day.

It felt surprisingly emotional when I finished, the 1/4mile stones helped me on the last difficult mile as my back was sore and I was in need of a cup of coffee and a sit down, but I am so glad I did it and so thankful to those who shared Purple Friday with me.

As I have said elsewhere, to those who walked and talked, shared stories and prayed, those who supported financially or by allowing others to take part (providing lifts and allowing time off work), thank you; you are all superstars.